Automation technologies and processes play a key role in one of the last reports published by FAO in 2022: The State of Food and Agriculture 2022. From global navigation satellite systems, automated crop production, autonomous machines, weeding robots, drones, automated feeding, monitoring technologies to precision agriculture; the automation trend is clear across the in livestock, aquaculture, crop management, and forestry subsectors.

“The sector is undergoing profound technological change at an accelerating pace” FAO. 2022. The State of Food and Agriculture 2022, leveraging agricultural automation for transforming agrifood systems.

The report presents agricultural automation as the natural result of more than two centuries of technological changes across the globe. It highlights their potential to contribute to the transformation of agrifood systems, making them more efficient, productive, resilient, sustainable, and inclusive in the years to come.

Agricultural automation and its evolution

Evolution of agricultural technologies and automation over time: 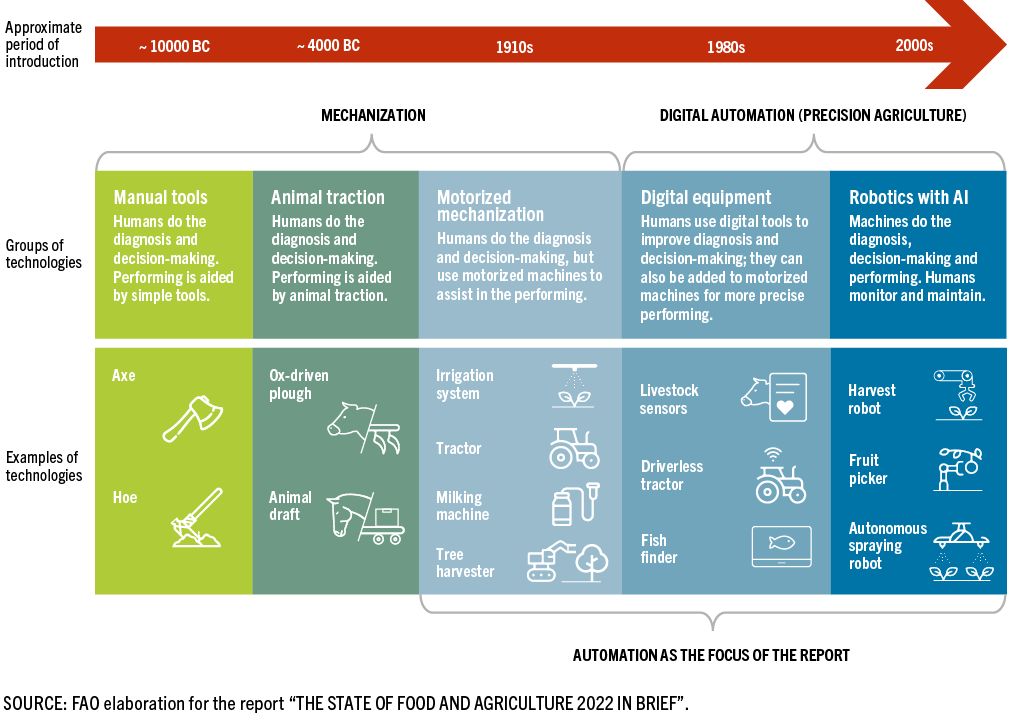 The relevance of agricultural automation: opportunities and challenges

As the title of the report suggests, leveraging automation in agriculture may prove difficult: agricultural automation comes with its own set of benefits and challenges. On the one side, automation has great potential to achieve higher efficiency, productivity, sustainability, and resilience, all the while protecting the environment and the Sustainable Development Goals – SDG 1 (No Poverty) and SDG 2 (Zero Hunger). However, it can also deepen inequalities if new technologies are not accessible to small-scale producers, less developed countries or regions, or other marginalised groups (such as women and youth in general).

Before the digital automation phase, motorized mechanization was key to agricultural transformation worldwide; however, adoption was widely different across developed and non-developed countries and regions – an example of the risk faced once again in this lastest automation era to come. Motorized mechanization (e.g., Tractors) will still play a relevant role in the years to come (alongside automation), especially for smaller producers or in less developed areas.

The impacts of agricultural automation on employment vary depending on the context. Where wages are on the rise and the rural population declining (mostly, in developed countries), automation may be the answer to a serious socioeconomic challenge, helping younger skilled workers find a place in the work market. On the other hand, where wages are low and the workforce is abundant, unemployment becomes a substantial risk.

The business model of agricultural automation for 2023

The use of digital automation technologies is growing, but mostly in high-income countries. As a result, the business model is not yet mature, and most technologies are in a prototype phase.

Key factors for the adoption of these new disruptive automation technologies are, first, awareness of a solution’s ability to perform agricultural operations successfully and, second, the ability of farmers to handle the solution. Thus far, digital illiteracy, reluctance to change or limited market competition have been identified as the most frequent obstacles faced. 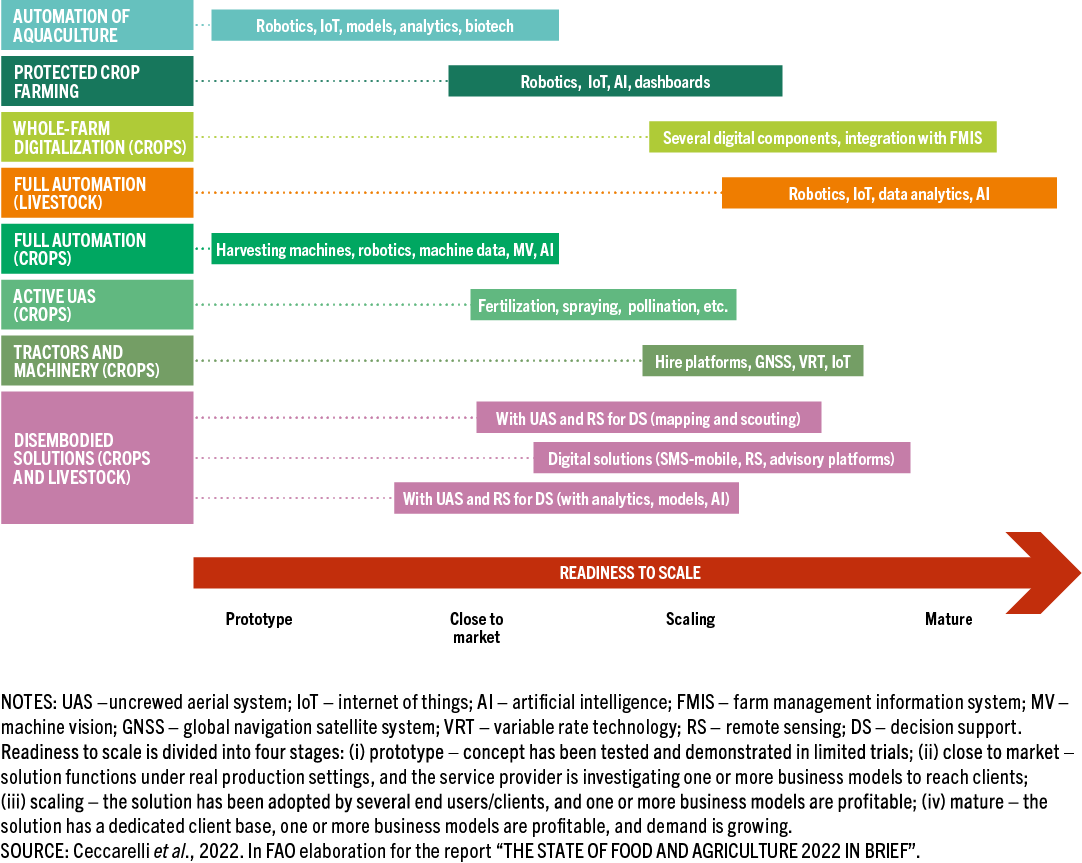 Main takeaways and recommendations from FAO

In summary, the prospect for 2023 (and the years to come) for the agrifood sector will need to have into account the role of agricultural automation:

“FAO truly believes that without technological progress and increased productivity, there is no possibility of lifting hundreds of millions of people out of poverty, hunger, food insecurity and malnutrition.” Qu Dongyu, FAO Director-General

Innovarum has been involved in a total of 11 collaborative projects that tackle different challenges in the sector. The recently launched project MainstreamBIO is closely connected with the issue of involving and connecting small-scale primary producers with practical innovations in the field. 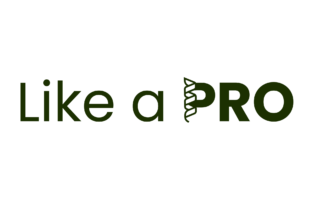 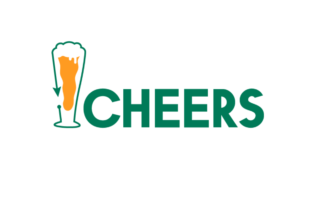 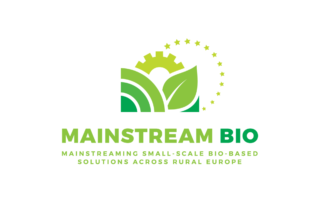 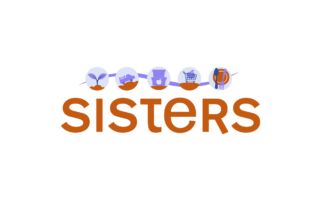 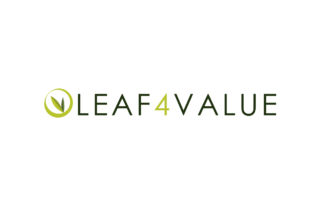 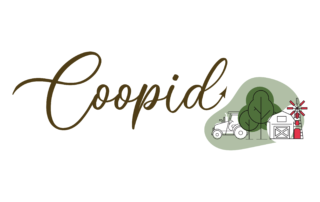 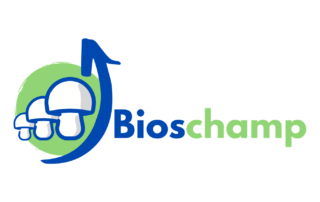 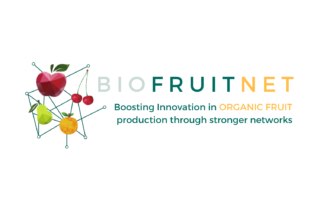 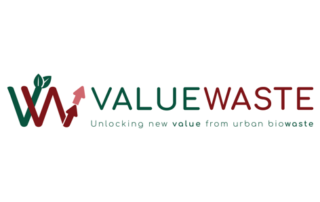 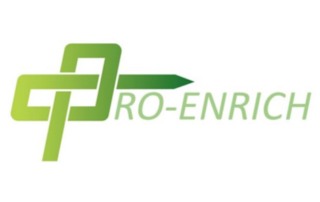 FAO. 2022. In Brief to The State of Food and Agriculture 2022. Leveraging automation in agriculture for transforming agrifood systems. Rome, FAO. https://doi.org/10.4060/cc2459en 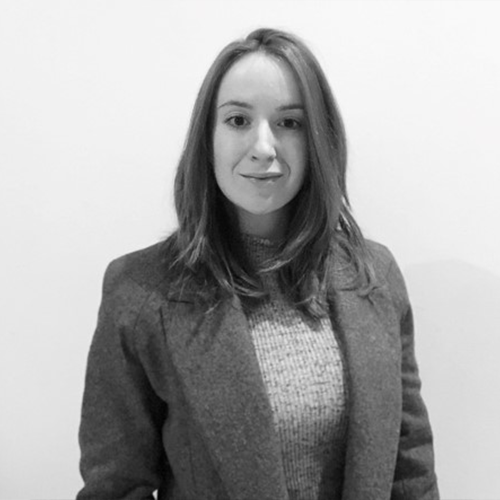 This article has been prepared by Africa Pardavila, Communications Manager at Innovarum.

Get to know our team